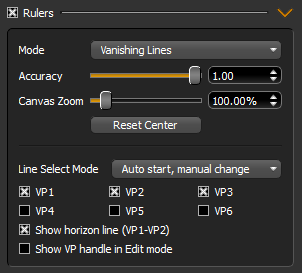 With the Linear Perspective ruler, you can setup your perspective scene very accurately by specifying viewing parameters and 3d line angles.

But sometimes you would like to quickly add perspective-correct elements to an existing scene where you don't know any of these parameters. As long as the scene is using a linear perspective projection (and not any type of curvilinear projection such as fisheye), the Vanishing Lines ruler will help you do this.

This ruler gives you up to 6 vanishing points (VPs) to work with (although you probably don't want them all active at the same time). Each point it computed automatically by adjusting two control lines. Simply line up the control lines with edges that are parallel in the 3d scene (for example, the opposing edges of a wall). You'll now be able to draw lines that are 3d parallel to these edges.

Starting with version 21.02.15, you can also place the vanishing points directly by dragging their control points while holding control.

Controls: To enter or exit VP setup mode, click on one of the blue control points that appear while holding control. Press shift to cycle through the VPs. While in VP setup mode, you can adjust the position of each control line by moving either of its points. If you hold the control key while moving a point, both points will move together, allowing for convenient repositioning of the line.

Each vanishing line has its own independent measure point unit distance, which can be changed by sliding the yellow control point that appears while holding control while in Freeze Mode (which is toggled via the pink control point). You can then use the measure points to quickly figure out 3d distances, and cut sections into equal parts. In the following example, the top block of a building is extended, making it symmetric. Notice how the measure points have been aligned to show us information about the building's size.

This ruler will also help when you need to draw inclines, such as roofs and ramps, as shown in the following example.

Starting with version 21.02.15, the placement of all your vanishing points and control lines is now saved in the preset, when you save the preset or save it as a new preset. The ruler center position within your Photoshop canvas is also saved. If you are using LNP with an art app other than Photoshop, you can use the center handle to realign all your vanishing points at the same time.