I've added a slightly bigger dot cursor (customAppCursor3x3.cur) to the installation folder. If you're using a high-DPI screen and have trouble seeing the original dot cursor when using the Custom Cursor feature, replace the customAppCursor.cur with this one. And remember that you can edit this file to create any cursor you want. (I recommend the IcoFX app for editing icons and cursors, it's pretty nice!)

Today's update fixes a couple of bugs, including one that could cause LNP's overlay window to freeze in some situations.

Ruler handle placement and tick sizes will now also be scaled by the DPI of the overlay window's monitor. This adds a more consistent look and feel when moving apps across monitors with different DPI settings.

Today's update brings lots of improvements to the Ellipse ruler!

Here's an example construction using most of these new features:

The Circular Pattern spiral scripts have also been updated to add exponential shrink/fade factors. You can create some interesting patterns when using these with the new axis ticks. 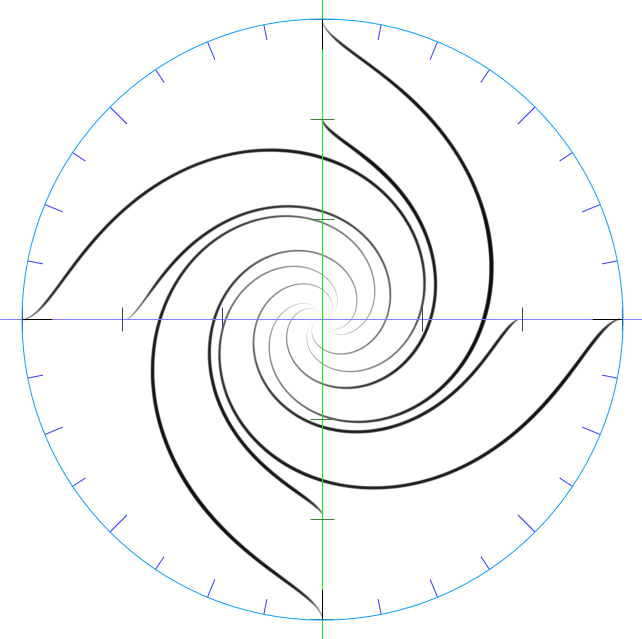 Here's the full list of bugs fixed in this update:

The UI translations for Lazy Nezumi Pro have been updated!

If you're on LNP version 22.05.23 or higher, download the new binary language pack from this page. You will not need to update the app itself!

Today's update is the biggest I've released in a while! Some much needed polish has been added to the user interface and experience, and many issues have been addressed. If you've been waiting to update, this is the one to get! Read on for the details.

You can now add LNP's processing features to your art apps by dropping a special LN icon into their canvas windows! The old "hook window" method could sometimes fail when using your pen over certain apps. This new method should work with both your mouse and your pen. The old keyboard shortcut to hook the window under the cursor still works the same way.

The new "Attach to Window" window will also show you the list of hooked apps, and let you detach LNP from hooked windows without needing to exit the art app. The flashing window animation has also been improved, and should now display correctly over any type of window (if the hook is successful).

Some common hooking errors are now handled automatically, and others generate much more useful error messages. Thanks to JP for helping me address an issue caused by 32bit/64bit mixups of runtime DLLs (which the updated installer should now fix).

I finally took the time to rewrite LNP's installer from the ground up.

Instead of copying the LNP Photoshop plugin file to the Photoshop plugins folder, the installer will now install links (shortcuts) to the LNP installation folder. This will ensure that Photoshop will always load the correct version of the plugin, and will help avoid plugin version mismatch problems.

Links are installed in the Photoshop plugin folders themselves, but also in the Common Files\Adobe\Plug-ins\ folders. This means that you shouldn't need to reinstall LNP after updating Photoshop CC. And unless Adobe completely change their plugin loading mechanism, this installer should now also work with future versions of Photoshop.

If you have a "portable" version of Photoshop installed in an unusual location, the installer may not find it. In this case, the app itself will offer to install a link for it when you use the "Attach to Window" method.

The app will now also offer to fix any plugin version mismatch problem it detects, in case any old plugin files were leftover and the installer could not find or remove them.

This update adds Windows Ink support for the following apps: Pencil2D, Xournal++, and Rebelle. Thanks to Adri, Vladimir, Walter, and Kasia for reporting issues with these apps, and for helping me test fixes.

Starting with this update, once LNP is loaded into an Affinity app, new canvas windows are automatically hooked (like with Photoshop).

Sometimes you need a change of scenery. I got tired of looking at the same old UI for years, so I decided to give LNP a little refresh. Nothing major. Can you spot all the differences? :)

The stylesheet used to style the UI can now be loaded from an external file, which means you can now make your own custom UI themes! The installer will place some example stylesheet files in the styles subfolder of your installation folder. If present, the app will then load the style.qss file from your user data folder's styles subfolder. The app will scan this file for changes while it's running, so you can edit the file and instantly see the results on the UI. (Custom stylesheet support for the preset toolbar may be added in a future update.)

The QSS file format is Qt's version of CSS (which is used for web pages). While it doesn't support all CSS features, it's still pretty powerful. You can view the reference guide here, and some examples here.

As a quick example, here's what a blue-highlight themed style looks like:

In previous versions, most of the user settings were saved to the Windows registry. This made backing up your settings and copying them to other machines tricky.

Starting with this version, the settings are now stored in the lazynezumipro.ini file in your user data folder (%LOCALAPPDATA%\Lazy Nezumi Pro).

In Win10 and Win11, LNP will continue to let Windows itself scale the windows automatically. I've started working on proper high-DPI support without Windows scaling, but there are still too many issues to be fixed.

This update fixes quite a few bugs, some that had been eluding me for a while. Thank you to everyone who reported these issues. Special thanks go out to MetaDragonArt, Matsuzaki, Pharan, Sula, and Iiku!

Starting with today's update, LNP's translation files will be stored in the translations subfolder of the installation folder. This means that you will be able to update them and add new translations without having to update the app itself. I have spent the last couple of months adding developer comments to most of the text strings in the app, which I hope will help translators with their work.

If you are an existing LNP user (and license holder), are comfortable around the app and its features, and speak multiple languages, I need your help! Please have a look at the new Translations page to find out how you can help.

Today's update fixes a few minor issues, and updates some of the translations. (Thanks Matsuzaki!)

The Vanishing Lines ruler now has different colors for its VP setup control line handles, which will make it a little easier to interact with. Be sure to check out the video about this ruler if you haven't already!

If you can, please donate to the International Rescue Committee. They do good work, and are currently helping refugees all over the world (including Ukraine).

Google.org is also matching up to $5 million in donations to Ukraine until April 30th. This is a great way to double your impact to help those in need.

This video will show you how to match the perspective of any scene with Lazy Nezumi Pro's rulers, in order to add perspective-correct elements to it.

It also goes through the basics of how to use the Linear Perspective and Vanishing Lines rulers. If you've ever struggled with these rulers, or perspective in general, this will hopefully help!