Today's update adds measurement ticks to the Connected and Parallel Lines presets! The angle (off the horizontal), and distance (in pixels and ticks) are displayed before you draw, so you can use these as pressure sensitive rulers. 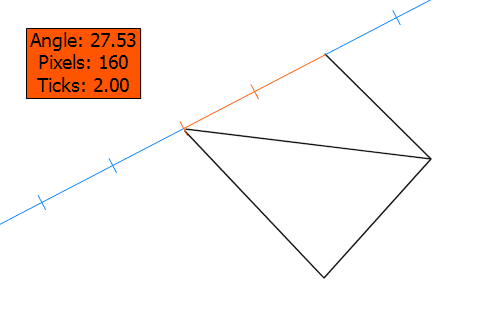 Ticks are now used in the Perspective, Isometric, and Fisheye presets as well, for better precision and rendering performance.

Speaking of performance, this update also adds a Off while drawing option in the Overlay Settings, in case the overlay rendering causes performance problems on your system.

This is also known as curvilinear or 5 point perspective, and maps a 180 degree field of view to a circular area defined by the radius parameter. It more closely represents our vision of reality, compared to linear perspective.

Today's update fixes a couple of bugs related to the Hook Window feature.

In other news, I am making good progress on the 5 Point Perspective (Fish-eye) constraint mode!

Today's release updates the Japanese translation, and adds a Korean translation! Please let me know if you find anything that should be corrected.

There are also a couple of bug fixes, including one that happens in SAI when using the latest 6.3.14 Wacom driver. This driver appears to have some freeze and lag bugs, so you may want to downgrade.

Today's update fixes a couple of bugs, including one that was preventing the Perspective Freeze Mode shortcut from being changed.

A huge thank you to all the awesome users who report bugs quickly and help me test fixes!

Today's update fixes a couple bugs, and adds a Freeze Mode to the perspective preset!

The default key is NumLock, and this will allow you to freeze the current perspective system, so you can draw lines within the system at specific relative measurements.

While in freeze mode, you can still change the measurement point unit distance, if you need to change the number of subdivisions.

In other news, a Korean translation for the LNP UI is coming soon! If you would like to help me proof-read the translation, please contact me.

Today's update fixes an issue where the overlay graphics window would sometimes start up on the wrong display in multi-monitor setups. Special thanks to Ivan for helping me figure this one out!

Today's update adds a manual snap mode to the perspective and isometric presets. You can use this mode instead of the auto-detect mode, by setting the snapMode parameter to 1. You can then use the snapLine param to change which line it will snap to (the shortcut for this is shift). No more false starts!

This update also fixes several issues with the overlay window, and the Disable on Pen Eraser setting now works with Photoshop CC in Windows 8.

If you need even more performance, be sure to turn off Anti-Aliasing in the Overlay Settings.

This update also adds a new preset called Smoothing - Weighted! This simulates a weighted pen that is affected by momentum and drag. Great for calligraphy lines with curves and loops! The output pressure is also directly computed from the speed of the weight, which makes thickness fade-in and fade-out automatic. Its settings can be controlled in the Distortion Scripting section.

This update adds support for the new Photoshop CC 2015 version.

Be sure to run the LN installer after you've installed the new Photoshop. After starting both apps, you may also need to change PS tools a couple times so that LN can sync up.

This update finally allows you to setup your own keys for the constraint preset parameters! You can configure them via the Settings/Edit Shortcuts menu, in the Constraint Shortcuts tab.

The Ellipse constraint can now also slide along the major axis, and both the minor and major axis now show an orange section for the size of the last drawn ellipse.

The Connected Lines constraint now has the option to connect lines from the start point of the last stroke, and a shortcut is available to switch between start and end points.

This update also fixes several bugs, including a crash at shutdown, and a crash in TVPaint.

A support request I get sometimes is from users who think that LN stopped working in Photoshop, when the problem is simply that they have a tool selected that is configured to be bypassed in LN.

To address this, this update now shows the currently selected tool in the status bar. If it's bypassed it will be marked as (OFF). And remember, you can configure which tools to bypass with LN via the Settings/Edit Photoshop Options menu.

This update also fixes a couple bugs related to the overlay window.

Thanks to users who let me know they were still having offset issues in Win8, I did some more research and found a much better way to handle pen input! This change adds better precision and will hopefully get rid of all offset issues for multi-monitor users.

Today's update fixes a couple bugs, including an offset bug on some multi-monitor Win8 configurations. Thanks to Kelly for reporting this and helping me narrow down the problem! If you are still experiencing this problem, please try checking or unchecking the Settings/Tablet Options/Pen Offset Fix menu.

The preset change overlay popups now use the preset's guide color to make it easier to quickly see which preset you've changed to. Thanks to Dylan for the suggestion!

In other news, Dacosta Bayley's March of Robots 2015 challenge is on!

Post your robot drawings to your favorite social media sites and tag them with #marchofrobots for a chance to win some cool prizes! For more info, visit: http://marchofrobots.com/home/.

This update fixes a couple bugs, including one that was causing a pen offset after rotating a tablet PC. This was tested on an Asus Vivotab Note 8 tablet. Thanks to Candice for reporting this and helping me debug the issue!

A huge thanks to everyone who has supported Lazy Nezumi Pro so far! I have to say, the global digital artist community is a pretty great one to work with. You all rock! Thanks for helping LNP become what some users called the Plugin of the Year!

And please keep sending me your art, I really love seeing what LNP helps create! I will reblog/retweet some of your posts if you tag them with #lazynezumi!

Please note that at the end of the month, I will no longer be supporting Amazon Payments or Google Wallet, since they are being discontinued by their parent companies. So if you are thinking of purchasing a license and wish to use either of these options, now's the time! I will of course continue to support Paypal and direct credit/debit card payments via Stripe.